We meet Matthijs Monkelbaan, the world’s first Polderdak® engineer, to discuss this business case.
As his job title suggests, Matthijs is the first engineer involved with the development of Polderdak for the MetroPolder Company.

Matthijs: “Typically rainwater is treated as waste: it is disposed of in the sewage system and, while clean, cleansed with the rest of the wastewater. It’s such a waste of effort and value, as rainwater is perfectly usable. That’s why we developed Polderdak: it enables us to recover the water from the many flat roofs in the city, turning it into a resource instead.’

Polderdak effectively turns a flat roof into smart water storage. It operates a system that collects rain from the rooftop. After the shower, the water is disposed of or used for irrigation, infiltration, or a greywater system. Thus, Polderdak is a foundation for a green roof, a solar panel roof, and a rooftop garden or rooftop park.

In an episode of the Dutch TV show Klokhuis, the added value of Polderdak is explained plainly and effectively.

Matthijs studied mechanical engineering at the Haagse Hogeschool in Delft, the Netherlands. His graduation project brought him to the company Dakdokters, where he first met Friso, the founder of MetroPolder Company.

They got on well, and Matthijs was impressed by Friso’s vision and passion regarding the opportunities for green roofs in cities. It was during Friday afternoon drinks that Friso offered Matthijs a job. Six years have passed since, and their collaboration is still going strong.

`The first two years, I was the development, production, consulting, and disruption solutions department in one, working closely with TU Delft. In 2018, we moved to Blue City in Rotterdam, where we welcomed colleagues and quickly grew to become the 7 people strong team we are now.” Matthijs is still the only engineer, hence his connection with us.

‘I developed the first version of Polderdak all by myself by purchasing and connecting small subsystems. It was like technical Duplo, and I had to teach myself many different things – lots of tinkering with connectors. I had assumed that it would be easier to work with a small printed circuit board, a PCB. But looking back, I should have made a large one, as it provides more room to work, and the Polderdak housing offers plenty of space.’

‘When the first Polderdak was commissioned, a recurrent failure quickly occurred. At one point, I would stop by all the roofs every three weeks to reset the system, hoping everything would function normally for a while. I could never find the cause of the failure.’

Through back channels, I came into contact with Casper and asked him if he could solve this problem. A period of time ensued in which we did a lot of testing – PCBs, power supply, etc. Despite the ‘tinkering with connectors,’ the tests showed that the circuit board and power supply electronics weren’t the problem.

‘Over the phone, Casper kept grilling me about Polderdak’s conditions on the rooftop. He did everything to find the cause of the malfunction. Eventually, we arrived at the housing. It turned out that the antenna triggered the failure: it was on the inside of the metal casing. A minor problem but easily overlooked by a mechanical engineer. Casper hadn’t even seen the casing. Nevertheless, he proposed to move the antenna, explaining why and suggesting an alternative position. With a final three-weekly checkup, all failures were solved.’

Matthijs needed no more convincing: Casper was to become his permanent sparring and development partner in the continued development of Polderdak and MetroPolder Company.

Brainstorming in the sun

After solving the antenna problem, Matthijs and Casper spent a beautifully sunny morning in 2018 brainstorming about Polderdak’s future. Subsequently, they established a list of requirements necessary to enter the next phase of development and business operations.

‘With Caspers’s tips and tricks and his support in the electronics development, we created and commissioned the first new Polderdak series. Next, we made some small but powerful changes and produced another three versions.’

At the end of last year (2021, Ed.) Matthijs and Casper had another strategy discussion, which resulted in a new list of wishes and requirements, including some important additions. For instance, for every component we use, a replacement is known and available.

Matthijs: ‘I enjoy Casper’s involvement and how he bridges the gap between what I know and need, detailing all the possible choices. It enables me to gain a quick and clear overview of the opportunities, making my work a lot easier.

Furthermore, I fully trust Casper and his team to develop a high-quality product that will pass inspection. If they do it, I know there will be no hassle. Of course we carry out tests as well, but really, we just go through the motions and don’t expect to find any bugs. There hardly ever are any.’

Quick and dirty is no option

Matthijs encountered one drawback in his collaboration with Casper, which showed in the start-up phase. ‘Sometimes, the sales market requires a product that isn’t available yet. In those instances, we offer a quick and simple solution that suffices for the time being. Quick and dirty, so to speak. Well, not when Casper has a say in it. He adamantly refuses to facilitate anything suboptimal. He either does something properly or not at all.

Although at the time, this might cause friction, afterwards, I am always happy with his resolve. The problems caused by a quick and dirty approach are always more urgent than when you do it right the first time.’

The Polderdak business has grown significantly. Sending Matthijs up on the roof to reset everything is no longer an option. With systems all over the world and larger, more demanding customers, they must deliver above par.

‘The past year was marked by quality improvement and issue mapping. Our first clients were genuine early adopters who would forgive suboptimal performance. But we have outgrown that phase, and our customers are becoming increasingly demanding. We must meet their expectations. Preferably exceeding them.

Since Casper shares our vision on quality, his approach to Polderdak dovetails seamlessly with ours. There is no need for lengthy explanations, and that saves a lot of time. We are currently moving from learning from past mistakes to preventing errors. To get there, the expertise of Pink Fluffy Unicorns comes in handy.’

Here we see the progress in the development of the printed circuit boards. From ‘fiddling with connectors’ to the final Pink Fluffy Unicorns version. 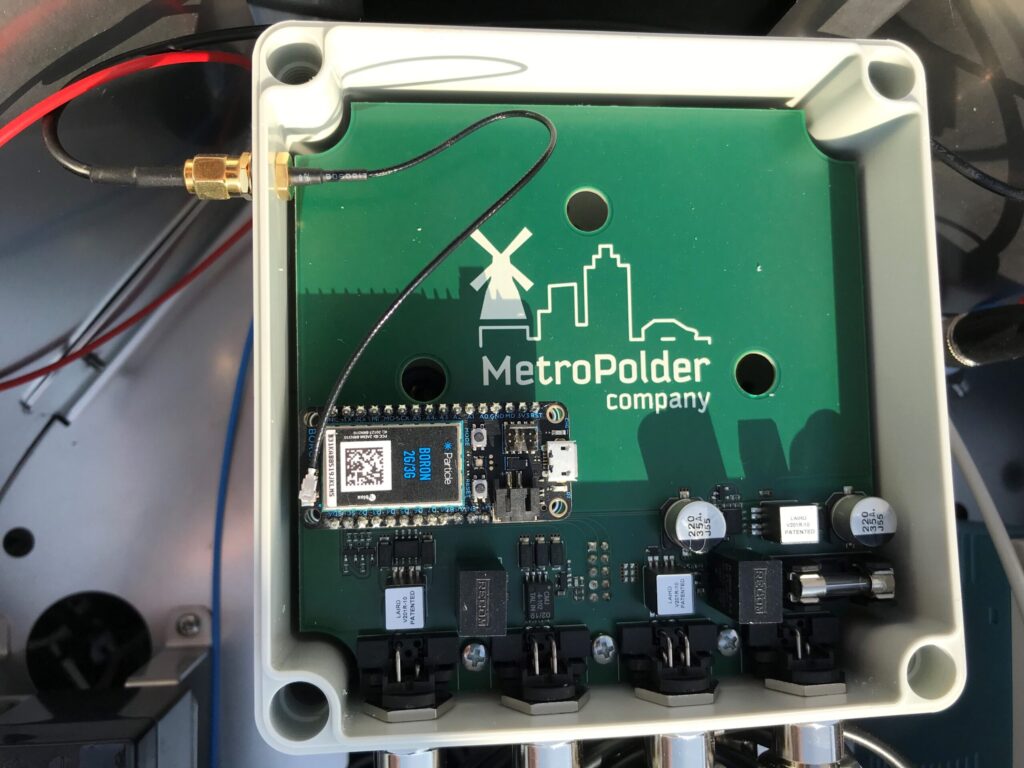