The input filter will stop SMPS switching noise from propagating out of the SMPS and provides a low impedance buffer for the SMPS to run off. Usually, one can find an element of inductance and capacitance in the input filter. When designing such a filter, make sure that the impedance that is seen by the SMPS on its input is sufficiently low from DC to at least 5 times the switching frequency. It is worth the effort to simulate the input filter to ensure this. 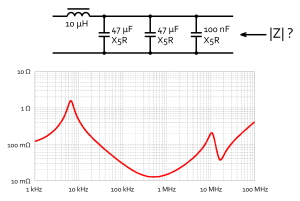 Be careful when using series inductors, as they resonate with the input capacitor(s). This causes a peak in the filter impedance at frequencies around the feedback loop cut-off frequency, which may cause instability of the regulator.

Ferrite beads are practical but may have a considerable amount of inductance and resistance on relatively low frequencies.

Adding a small (RF) capacitor to the input filter can facilitate high-frequency routing on the PCB layout. We’ll talk about that later.
>h3>Output inductor

Make sure that the sum of DC current and ripple current never exceeds the inductor’s fully derated saturation current. The inductor should also satisfy the requirements for DC current. Also check that the inductor’s SRF (Self-Resonant Frequency) is adequately above the switching frequency of your SMPS.

Using shielded or at least semi-shielded inductors is a good practice to stay out of EMC-related trouble. Remember that inductor shielding is imperfect and even shielded inductors have a stray magnetic field. The closest victim to this field usually is the PCB.

Also look for maximum capacitive load requirements. Because this requirement has to do with loop stability, all capacitors on the PCB that are connected to the output must be included in the maximum capacitive load calculation, not just the ones close to the regulator. A ferrite bead usually does not isolate large capacitors from the power supply rail.